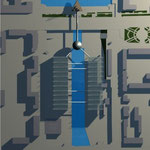 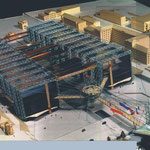 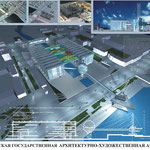 The idea of this project is based on the historical prototype that exists as the structure of the architectural composition of the old Ekaterinburg factory and that was supposed to express the power and greatness of Russia in the 18th century. Earlier huge forms of hydraulic installations were a vivid expression of this power. In the 1960's the majority of the old factory structures were destroyed. The site where the city originated lost its former meaning.
The purpose of the project is to restore the cultural values of the cradle of Ekaterinburg through the project of named «Technoculture 3000 ». The idea of the project's structural skeleton is based on similarity to the structures that were once in existence. The refined industrial appearances of the buildings is associated with factory structures within a system of huge hydraulic mechanisms, it is in contrast with the sociocultural purpose of the polyvalent project. Energy and life fill these buildings; constructed using advanced technological achievements of the Millennium.